Jerry Brandenburg is a native Dallasite who graduated from Crozier Tech High School in 1954, and later  received a B.S. in Math from UTA. He married Roneida Lake in September, 1966 and ha 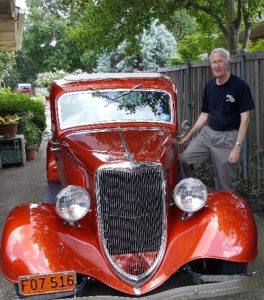 s seven children. He retired from Texas Instruments as an Operations Manager, TI-KOTE/BBr3/Waste, after 40 years of service and is a founding member of the TI Alumni Association.

He became fascinated by orchids, built a greenhouse (later enlarged to 1000 sq. ft.) to better grow them and joined the American Orchid Society in 1971. He became an accredited AOS judge in 1979, traveled nationally and internationally to judge orchid shows, served as President of the Greater North Texas Orchid Society and is a GNTOS Silver Member, chaired the Dallas Judging Center for  nine years and was promoted to Judge Emeritus by AOS in 2015.

He also loves antique cars and restored a 1934 Ford five-window Coupe after he retired from TI which won many trophies at various car shows.  He has a wicked sense of humor.