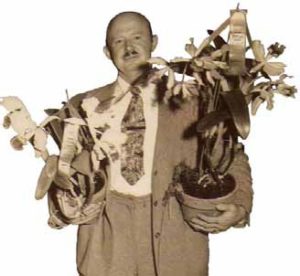 The history of the GNTOS goes way back. In the mid-40s there were only three orchid growers in town: Eli Sanger of Sanger Brothers, which was Dallas’ biggest department store at that time; Roy Munger, known for Munger Place and Munger Street, and Percy Larkin.

Margie Corn, a garden columnist, was the source of any orchid information they could find and she gave their names to a woman running Hardy’s Seed Company, Mrs. Moses.

They gathered at her house one day in 1946 and it was Mr. & Mrs. Polhemus, Mr. & Mrs. Roy Carter, Homer Baldwin, Percy Larkin and a young man from Waxahachie named Costa-Lanus. They decided they would apply for AOS membership and started receiving the Bulletin and meeting monthly. More and more people started to show up and they elected Percy Larkin, Jr. their first president in 1947. This was the North Texas Orchid Society.

They held their first show in 1950 at the Marsh Kaiser Fraiser automobile agency on Ross Avenue. Jack Morris was president of the society and Homer Baldwin sent out invitations to everyone who grew orchids in Dallas. Invitations also went to the big orchid firms who would send representatives from around the country to the show.

They had everyone sign a book that came to that show.

The following year with much encouragement from Homer Baldwin, most of the members from the Dallas Orchid Society came back to join the original society. Later, they decided to become affiliated with the American Orchid Society so they wrote a Constitution and Bylaws for the society. On March 19, 1954, they were issued a charter by the AOS as the Greater North Texas Orchid Society.

They put on a show in the Dallas Garden Center but there weren’t enough plants in thearea so the bulk of the show was made up of boxes of blooms sent to them for free from commercial growers. They’d get five, six, or seven boxes of flowers from different growers from all over the country – even overseas.

Of course, Homer had mailed cards to everyone who had an ad in the Bulletin to achieve this.

Fortunately for Homer, Lena Baldwin knew how to type and she and another woman spent half the night writing letters on two typewriters but it worked and they had orchids for the show.