Roneida (a.k.a., “Ronnie”) Brandenburg is from the panhandle of Nebraska, graduating from Scottsbluff High School as a member of the National Honor Society in 1956 and moving to Dallas to attend college. (Mainly because her cousin graduated from SMU and painted a glowing picture of the Dallas area.) She met Jerry Brandenburg while they were bowling on Texas Instruments teams and they married in September 1966.  She received a degree in Math from UTA in 1968. She had joined TI in 1960 as a secretary, transferred to their IT department after receiving her degree, was made a Member, Group Technical Staff in 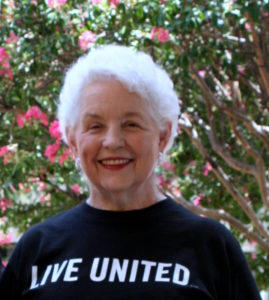 1985, retired from TI in 1991 as a Computerization Manager, DSEG Contract Services, but later contracted back to TI to create a cylinder-tracking system until 1997.  She is a founding member of the TI Alumni Association and is still very active in TIAA.

Her main hobby was growing tropical plants so she talked Jerry into building a greenhouse for her which he agreed to do if he could buy and restore an antique car. She joined the American Orchid Society in 1971, became an accredited AOS judge in 1980, traveled nationally and  internationally to judge orchid shows, served as President of the Greater North Texas Orchid Society in 1980, chaired the Dallas Judging Center for seven years and was promoted to Judge Emeritus by AOS in 2015.

She loves playing bridge with her fellow TIers and adores her seven kids and pets dearly.